“Multi-photo composite showing Perseid meteors shooting from their radiant point in the constellation Perseus. This year’s Perseid shower will peak on August 12-13 (Wednesday night-Thursday morning) with a meteor a minute visible from a dark sky.” Credit: NASA

“Every August, the night sky is peppered with little bits of comet debris in what we call the annual Perseid meteor shower. In 2015, the Perseids will peak on Aug. 12 and 13, with up to 100 meteors per hour possible for observers with clear, dark skies, according to NASA. The Perseids are bits of the comet Swift-Tuttle and often create the most amazing meteor shower of the year.”  (www.space.com)

Now that you know all about the great Perseid Meteor Shower of 2015, get your blankets ready, and go out before dawn on August 13.

My poem in honor of this spectacular celestial show is a sonnet called, “The Meteor Shower.” Written a few years back, it has never been published. I thought it would be nice to post it this week and share it with a few readers other than myself.

The sonnet form I chose was the Spenserian sonnet form, invented by poet Edmund Spenser:

I’ve provided an audio clip below to listen to with the poem or while you look at the beautiful pictures above or the lovely one following the poem.  (Note: audio takes a few seconds to begin after you press the play button.)

But who can hold the stars? Let us look then,
Let us hear what songs the skies are singing
As we lie here on the dewy grass when
The Perseids start their wild summer dancing,

And we are so enraptured, not thinking
Of anything but this heavenly sight,
Unable to look away from shooting
Stars that sprint and leap, now left, then right.

Beneath this show, on such a timeless night
As life stands still, we glance at every star
In wonder that pieces of debris might
Create syncopated movement from afar.

Such beauty holds us quiet, but these thoughts
Betray the silence hidden in our hearts. 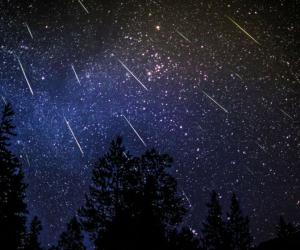 15 thoughts on “Sonnet: The Meteor Shower (Get Ready for the Perseids)”

This site uses Akismet to reduce spam. Learn how your comment data is processed.